In this painting ancient Neolithic and Canadian imagery references integrate; where wild buffalo once roamed is now a stationary reference to a limited area, Wood Buffalo Park. The central circle echoes Neolithic life giving symbols even perhaps the shrine grave. Levels of polyvalent interpretation emerge from imagery juxtapositions. The bear foot marks amidst the luminous blue are reminiscent of the grand aurora of northern skies yet the beauty of its luminosity emits an almost ominous glow. Bear tracks circle the buffalo; illustrating the matter of time. The birch tree is painted in acrylic; the tree ends are sawed off circles of forest wood.

This is the final post of the series, Meet the Artist Eisert Hall prior to her interview with CiTR Radio Station. Follow this site to listen to the interview broadcast.

After drawing, woodblock printing, working with concepts and imagery to perceive, know, understand through body, mind, memory; these art works were created spontaneously. 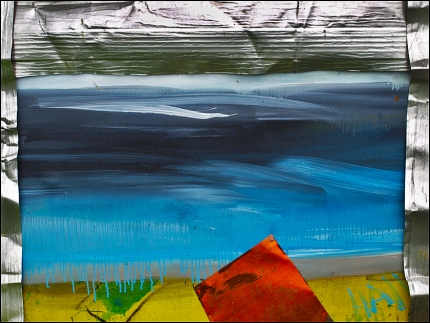 The charaleeg Word Post has received considerable traffic and positive comments from people viewing the posts. The Meet the Artist – Eisert Hall project will be continuing with several more posts. You will be advised by a Word Post on charaleeg of the date that Eisert-Hall will be conducting a radio broadcast in Vancouver about the work that she has posted and will be posting on the charaleeg Word Press website.

Triptychs Series 1985-87
The Bride, detail ; Pascal & the Wilderness, Tree of Life; Tree of Death; Angels, Bride I & II, & Pascal;
4 triptychs each, 8’ x 8’
The Bride 1985 Copyright © Eisert Hall
“…the present culture is caught between ages. This results in discomfort even confusion. As I create these works I am aware of a struggle in my own integration. The future struggling with the past, the mind wanting the spirit as integral; emotions stilled by a question that emerges from the process of creation. I do not see my own multi level struggle as a solitary quest; it is a quest resulting from an age that is demanding a more total integration. Room is being made for both the mystic and the scientist…” Excerpt, Eisert Hall Notes, 1985
Inspiration: Patterson Ewen, Mural painting, 1981, Lethbridge, Alberta, Canada; Residencies intermittent; New York 1984-5, Research; New York; Marcel Duchamps, a urinal, “Fountain;” Robert Rauschenberg, Paintings, Combine works; Claus Oldenberg and Coose van Bruggan, soft sculptures of utilitarian electronic objects, ; 12th century Italy, Cimabue, Duccio, Massacio, Uffizi Gallery; Leighton Artist Centre 1985, Banff, Alberta, Canada.
Exhibitions; 1990- 91 Works Festival; Edmonton, Alberta Canada; 1987 Southern Alberta Art Gallery, Lethbridge, Alberta, Canada;
1991- 92 Combine Paintings, 2’x 4’ Design Gallery, Edmonton, Alberta, Canada;
1989, Dialogue Gallery, Toronto, Ontario, Canada; 1989 Neopersona, New York, USA

“The man described for us, whom we are invited to free, is already in himself the effect of subjection much more profound than himself. A ‘soul’ inhabits him and brings him to existence…the soul is the effect and instrument of political anatomy; the soul is the prison of the body.”
― Michel Foucault, Discipline and Punish: The Birth of the Prison

This interactive installation presented three large paintings. Only one of the three is shown here: Choice: See, Hear, Say Do Nothing; 9 X 16 feet;
Other paintings: The Prisoner’s Story, 9 x 25 feet; And Powers, 9 x 16 feet. Text of Stanford University Experiment, 1971 and reflecting surfaces posted.