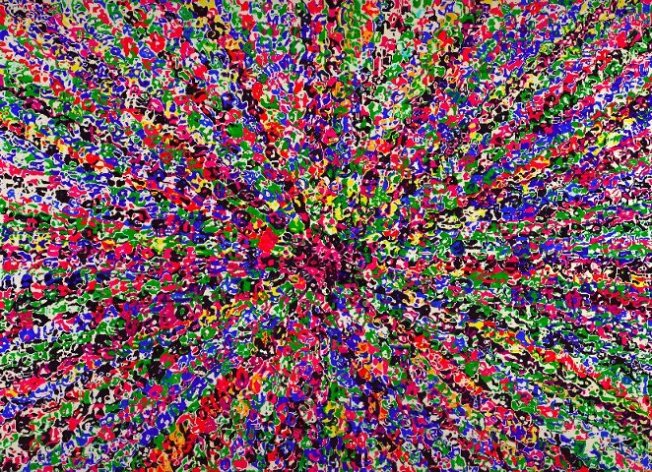 Kamal makes a powerful statement with two new works of art. We know Kamal as the founder of Photofade, an on line photography agency but this is your first introduction to Kamal, the painter. Kamal has returned to his roots, having been trained as a painter in Shiraz, Iran prior to coming to Canada. His new works mix Iranian symbolism and design with colours and art trends of the 1960´s. Kamal´s paintings, like his photography, capture images. In the same way as his photographs his paintings preserve the immediate but in doing so reflect his past and the cultures that have shaped his art experience.

The paintings are influenced by the communities and cultures of Iran that he had known prior to his arrival in Canada. They reflect designs that can be found in Iran´s production of gilim and jajim carpets. His paintings show wave like patterns and detailed design with repetition of symbols that one can find in the gilim and jarim handcrafted carpets. Kamel acknowledges that his paintings unintentionally display elements from this style of carpet with which he indicates he has always been familiar.

My first response to the paintings was to note the vibrant designs and colours that he had used. Closer review of the precise detail and the repetitive use of colour brought awareness of the antiquity of the design despite the modernity of the process and materials used in creating the paintings. They have a psychedelic effect on the viewer. They are visually simulating and give rise to the question, what process was used in their creation?

The word ¨psychedelic¨ has been used since coined in the 1950´s to describe styles of painting, fabric and design with abstract decoration of multiple bright colours. That appeared to match both paintings as did the history of the word psychedelic, which was derived from the Greek words ¨psyche¨and ¨deloun¨- visible. The paintings cause their viewer´s mind to be stimulated. They manifest a desire to focus one´s consciousness but evoke a fluidity that recognises that mental processes are constantly shifting and changing. Much like a photograph, each painting captures the momentary acuity of a state of mind, a temporary state of enlightenment. The graphic designs used in both paintings fit the new styles of art being developed in the world of Internet technology in the 21st century.

The process that has been used to create the two paintings that are being displayed is modern, using permanent markers and highlighters on cardboard. The paintings are small, approximately 12 X 11 inches and 7 ½ X 12 inches. They have been scanned and processed by photoshop.

The paintings are an art product from the 21st century. They can be defined as recombinant art: combing designs inspired by the Iranian galim and jajim carpets, the psychedelic style and colour of the 1960´s and using a modern process mixing painting and photoshop.

We invite your comments and enquiries about the paintings.

This site uses Akismet to reduce spam. Learn how your comment data is processed.